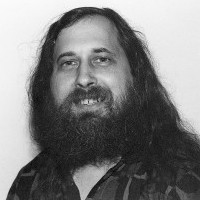 Dr. Richard Stallman launched the development of the GNU operating system (see www.gnu.org) in 1984. GNU does the technical jobs of any operating system, but its specific purpose is to give computer users the freedom to cooperate and to control the software they use. GNU is free software: everyone has the freedom to copy it and redistribute it, as well as to make changes either large or small. The GNU/Linux system, basically the GNU operating system with Linux added, is used on tens of millions of computers today, although most of its users don’t recognize this (they think the whole system is “Linux”).

Richard Stallman is the principal author of the GNU C Compiler, a portable optimizing compiler which now supports over 30 different architectures and 7 programming languages. Stallman also wrote the GNU symbolic debugger (GDB), GNU Emacs, and various other programs in the GNU system. Richard Stallman invented the technique known as “copyleft”, which makes code or text free and requires subsequent works that incorporate a significant part of that code or text to be free in the same way. He is the main author of the GNU General Public License, which implements copyleft.

Stallman’s book of essays, Free Software, Free Society, second edition was published in 2010, along with his semiautobiography, Free As In Freedom, which is a corrected edition of the book by Sam Williams that presens my Stallman’s point of view in contrast to Sam Williams’ point of view.

Stallman received the ACM Grace Hopper Award for 1991 for his development of the first Emacs editor in the 1970s. In 1990 he was awarded a MacArthur Foundation fellowship, and in 1996 an honorary doctorate from the Royal Institute of Technology in Sweden. In 1998 he received the Electronic Frontier Foundation’s Pioneer award along with Linus Torvalds; in 1999 he received the Yuri Rubinski memorial award. In 2001 he received a second honorary doctorate, from the University of Glasgow, and shared the Takeda Award for Social/Economic Betterment with Torvalds and Ken Sakamura. In 2002 he was elected to the US National Academy of Engineering, and in 2003 to the American Academy of Arts and Sciences. In 2003 he was named an honorary professor of the Universidad Nacional de Ingenieria in Peru, and received an honorary doctorate from the Free University of Brussels.

In 1999, Stallman accepted the Norbert Wiener Award of the Computer Professionals for Social Responsibility on behalf of the Free Software Movement as a whole.